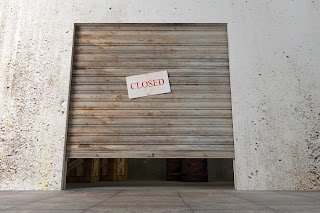 Contrary to the complacent belief of most homeowners, garage doors are not immune to problems. Usually, we take them for granted, because they are quite durable, and we use them for many years. When a breakdown does occur, it often comes as a shock, and at a time that is most inconvenient, for example, on the morning that you’re already late for work and the door refuses to open. In order to keep a garage door crisis from happening in your life, there are some telltale clues that you need to watch for that will let you know in advance that something is going wrong.

1. One of the most common garage door problems is the result of failure to keep the working mechanisms properly lubricated. The problem can manifest itself as a squeaking sound as the door opens or closes, and it’s usually caused by dry rollers, tracks, or bearings. It’s a problem that can generally be averted by keeping these items oiled before they totally dry out. A bit of preventive maintenance can save you big repair bills later on.

2. It may be that your door isn’t closing properly the way it did when it was new. This can happen so gradually that you may not even notice it if you aren’t watching for possible problems. Usually, you’ll find some type of obstruction that isn’t allowing the door to close as it should, but it can also be indicative of a broken cable or a damaged cable pulley which may mean it’s time to call in the professionals.

3. If your opening or closing garage door starts making a scraping sound, it could mean that your cable has gotten worn and needs to be replaced. It can also mean that your reinforcement strut is no longer even or that it has become out of position in some way. If you are unable to figure out what is causing the sound and how to fix it, once again you should consider calling a garage door professional.

4. Sometimes your door can begin moving much more sluggishly than it once did. This is another problem that can sneak up on you because it happens so gradually. This can be attributable to the springs that operate the door being worn out. You want to catch this condition early so that you can have the springs replaced before one of them snaps. The snapping of a tension spring can be dangerous.

Garage door problems don’t happen every day, but they do come about slowly, over time, because of daily wear on the door and its parts. Having regular preventive maintenance done on your door and mechanisms is the best way to ensure that something more major isn’t going to go wrong somewhere down the line.